Strategic Initiatives From The World Field


Reports on strategic initiatives from each world devision.

Strategic Initiatives From The World Field

In the East-Central Africa Division, we have launched a program called "Close Range Shepherding,” in which believers are oriented in matters of faithfulness one-on-one by pastors and other spiritual stewards. This has helped to raise the percentage of participation in returning  and giving tithes and offerings from 25 percent in 2016 to 29 percent so far in 2017. We are strategically on course to reaching our intended goal of  40-percent member participation in giving and returning for 2017.

The Euro-Asia Division has set a goal to help members develop their talents and gifts to serve society, and to realize all the resources given by God to everyone. One of our projects is family camp meetings organized by the Stewardship Ministries departments of our conferences and missions. During the camp meetings, seminars were held on the topics of financial well-being (faithfulness in offerings and tithing) and using our gifts in missionary service.

In 2018, within the Inter-European Division, we are proposing a campaign to raise awareness of the importance of stewardship ministries and our responsibility as stewards, as well as to motivate consecration and dedication.For this purpose, together with Stimme Der Hoffnung, we will be providing motivational videos, as well as leaflets and posters translated into regional languages within the division and made available to local churches to be used in the first quarter of the year, when the theme of the Adult Sabbath School Bible Study Guide will be on stewardship.

One of the programs we run in the Inter-American Division to train pastors and encourage members in the knowledge and practice of faithful whole-life stewardship is the Holy Convocation. We have organized Holy Convocations in three unions so far in 2017: South Colombian, Puerto Rican, and Central Mexican.

Stewardship education and promotion are very important in small regions such as the Israel Field. Every year I meet the Stewardship leaders of the local churches and encourage them to promote the principles of stewardship every Sabbath in their local churches. I visit all the churches and companies in Israel Field every year. The result is a 5 percent increase in tithe income. Every year we see a 7 percent increase in church membership. More members means more income, which provides more funds for outreach.

The Middle East and North Africa Union Strategic Planning Committee voted at the end of 2016 that one of the five major goals for this term is to cultivate members and leaders who are faithful stewards committed to supporting the church with their time, talents, and treasures. This was followed earlier this year by a stewardship worship for our church workers in the North Africa region, in order to engage and further equip local church leaders in this ministry. We intend to run similar workshops in the rest of our union regions with the aim of implementing and achieving the strategic stewardship goal set for our union.

Two resources produced by the NAD to meet our ministry goals are (1) “Stewardship, Motives of the Heart,” the Adult Sabbath School Bible Study Guide for the first quarter of 2018. The companion book carries the same title. The study guide examines how materialism exerts an influence on us, the antidote to this issue, and the outcomes of being a good steward. (2) Stupid Money, and Things People Do With It. This is a TV program that will air on Hope Channel beginning in October 2017. Its focus is on stories, interviews, and commentary dealing with mistakes people have made in spending their money and advice on how we can manage it better. Season Two is now being planned.

The Mongolian Mission in the Northern Asia-Pacific Division invited Elder Marcos Bomfim and Pastor Kwon JohngHaeng, the Stewardship Ministries directors of the of the General Conference and NSD respectively, to speak for their nationwide summer camp meeting, July 19-23, 2017, with a focus on stewardship. The book 101 Questions and Answers on Tithe was translated into the Mongolian language, and Mongolian church leaders announced that they are going to hold a nationwide quiz competition based on this book. This will raise awareness among new members of the importance of tithing, and will serve as a refresher for long-term members.

The main goal of the South American Division Stewardship Ministries Department is to raise the number of faithful tithers by 10 percent each year based on the ABIS (Adventist Business Intelligence System for data analysis). In order to do that we hold theory and practice training classes to equip Stewardship pastors and their church teams. In 2016 we raised the number of faithful tithers by 14 percent in all unions.

The Southern Africa-Indian Ocean Division Stewardship Department is constantly mobilizing pastors and local churches to nurture their members through home visitations. This initiative offers an effective means to bring the stewardship message to all segments of the church. Holy Convocations are held as another means to revive faith, including the practice of stewardship, in our regions.

Training in the South Pacific Division is ongoing for pastors, elders, and members to teach core stewardship concepts such as finances, healthful living, time management, and discipleship. Most recently the training is taking place in district churches of the Samoa-Tokelau Mission in the Trans Pacific Union Mission; at a campmeeting in the Vanuatu Mission on Santo Island; in Madang Manus Mission, and in Sepik Mission in Papua New Guinea. In October 2017, 13 videos will befilmed and edited to align with the lessons on stewardship in the Adult Sabbath School Bible Study Guide in first quarter 2018. The principal contributor of those lessons is John Mathews, Stewardship director of the North American Division. The videos will be made available to the GC for sharing.

The SPD Stewardship Department plays a critical role in Ministry Impact Committee, which reports on the impact of SPD ministry entities on communities they seek to reach. This is a new requirement of the Australian Charities and Not-for-Profit Commission.    SSD: Noldy Sakul

In the Southern Asia-Pacific Division we are working toward the goals of training all elders and pastors from the local churches to the union level together with every mission to become financially self-supporting. For example, we held a four-day Stewardship Convention and Certification in Davao Mission of the South Philippine Union Conference in August 2016. Hundreds of delegates, including 60 pastors and more than 500 church elders, attended. They promised to be faithful stewards, to do regular member visitation, and to hold quarterly revival meetings on the theme of becoming Strategically Stewardship-Compliant Churches. The tithe and offerings have increased significantly compared to the previous year. We will soon hold mid-term evaluations in all unions.

The plan in progress in the Southern Asia Division Stewardship Ministries Department is its initiative to print Counsels on Stewardship by Ellen G. White and the Church Manuel in the six major Indian languages: Hindi, Marathi, Telegu, Kanarese, Tamil, and Malayalam. Translation of these books is in progress.

“Let God Manage You” is the foundational theme of Stewardship Ministries in the Trans-European Division. I hope and trust it creates a wholistic view of the meaning of stewardship. To support this theme on a digital platform I’ve created a Facebook page with that name, to raise stewardship matters. For example, for the month of September the page with feature daily quotations from The Practical Christian,  by Bertram L. Melbourne, with reflections from the letter of James. If people visit the page 10 times we provide a free copy of the book. That’s just one small way in which we’re trying to raise the stewardship profile in our region.

In the West Central Africa Division, under the general theme “Renewal With the Commitment of Putting God First in All Areas of Life,” Stewardship Ministries is focusing on four basic steps: (1) Communion (spiritual), (2) Relationship with God (physical), (3) Mission (social-redemptive), and (4) Discipleship (mental). As a department we are growing daily as we engage pastors and administrators to fully participate in the implementation of our dream of renewal. Growth is already evident in places where this vision has been implemented. 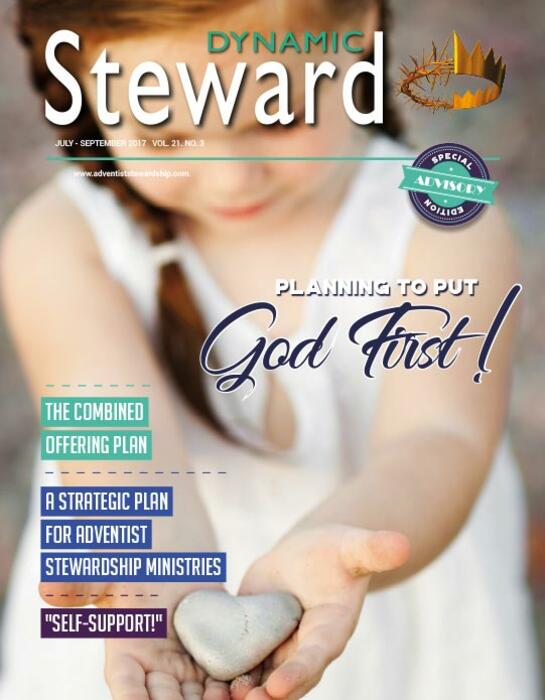