I was born in Durban, South Africa, the youngest of three siblings. My family was working class. We had a happy childhood, but things changed when my dad needed to move up to Johannesburg to find employment. The rest of the family moved to Johannesburg a year later, when I was 8 years old. It was quite an adjustment for me. My school was predominantly Muslim. I never fared particularly well at primary school. I was soft-spoken and shy, and my teachers made it obvious that they did not have much faith in my future.

South Africa was racially segregated in those years, and I grew up in a Muslim area called Azaadville. We were among the few non-Muslims in the area, and as such we stood out. I found refuge in such sports as soccer and cricket, and these were the things I lived for at the time.

How did you accept Jesus and choose to join the SDA Church?

My parents were Adventists. They drifted away from the church on moving to Johannesburg, until many years later when I was in my early teens. My mom had bumped into an old church friend at the local supermarket, who asked her where she attended church. She was a bit embarrassed by the question, but the woman persisted and asked about the kids, and if she could pick us up for church. My siblings and I began attending that week with her, and were warmly welcomed into the church. A family of four brothers and their wives took special time with us.

Years went by, and we attended church weekly. When I finished high school and went to study in Durban for a year, it would be one of the highlights of my spiritual life. This was the beginning of a real walk with Christ. I would get to church even before the gates were opened, and I could not wait for the Sabbath to begin. I enjoyed studying the Sabbath school lesson, and made a special effort to participate thoughtfully and knowledgably in the discussions.

I dated somebody from the church for several years. Sadly, she died in a road accident about two months before we were to be married. I spent a lot of time asking God why this untimely tragedy had happened, but there was just silence. It took time for me to heal, and I decided to worship at a different church. After some time I met a lovely young woman who is now my wife, and we were married about two years later.

I was among the leaders, but my relationship with Christ was not as strong as I had thought. My Christianity was based largely upon secondhand information. Once I was invited to accompany a lay member for a Bible study. I loved this so much. I was silently longing to do the same, but not knowing how. I began to pray about this, and the Lord opened several opportunities. Somehow I seemed to be bumping into old friends that I had not seen for years, and the conversation always led to Christ. I invited them to the Bible study group I was conducting. Before I knew it, I was presenting the studies to a group of 10 people. This forced me to study more myself. I was hooked. To this day, my love of doing Bible studies and leading souls to Christ has continued and grown. The Holy Spirit spoke to me when I picked up the Bible to study for myself. I discovered Jesus, and my life was not to be the same again.

What has led you to become self-employed?

I lost my job, and could not find work for several months. I could not understand why. I had always been faithful in my tithe, and I thought the Lord would take care of me. I had experience, and I felt that I could have and should have been able to find work. But God had a different plan for me. To survive, I made hair products in my mom’s kitchen and sold it to clients from the company I had worked fo,r which had closed. I don’t know how it happened, but I survived and managed to pay all my bills and returned my tithe while still looking for a permanent job.

God opened a door for me in sales. I barely said a word in the interview, but got the job. After three months I was called into my new boss’s office, and my employers told me that they had made a mistake. Now they regretted hiring me because of my poor performance in sales. I pleaded with my boss to give me another three months, with a lower salary. This was really my first successful sale! He granted my request, and needless to say, I was never called back into the office, and soon was one of the leading salespeople in the company. I can only thank God for this, because looking back, I see that I had to wait for the right time and place for this opportunity to open up for me to get into this company.

After losing my wife-to-be in the tragic accident, I was not in an emotional condition to continue at this company, and I left. The company was understanding and asked me to open a small company to service just a few key accounts for them. I ended up starting a business, and slowly but surely it grew. No fireworks, but I made a living. I worked only a few hours a week, and this small income helped pay the bills. Slowly, as time moved on, I felt better, and the business grew. Eventually after I was married, my wife left her work to help me grow the business. Slowly but surely we became more and more viable.

How did your business grow over time?

I was spending many hours giving Bible studies at the expense of my business. God was good, and the more time I spent with Him, the more the business grew. Once I attended a precampaign fundraiser for a large evangelistic effort that was being held in the West Rand of Johannesburg. After listening to the message being presented, I felt the urge to contribute. When the pledge forms came around, I wrote down a number, but was not satisfied, since I knew that I could do this amount without sacrifice. I added a zero at the end, and arrived at an amount that I did not have and could not afford. When I shared it with my wife, she was surprised and asked how we would do that. I told her I felt that God was asking for us to do this.

I thank God, however, that He gave me a godly wife, although the home we lived in was bare. The cupboards did not have doors, and there was a long, long way to go toward making it comfortable. We agreed and pledged this, not knowing how we would meet this pledge. We prayed together about this, and the Lord provided. I sold a vehicle of mine, with some regret, and raised the money. With this we could honor our pledge.

Just a week after this we were asked to make another contribution to ASI to raise funds for building one-day churches. After seeing God work things out, we decided to commit to this new project as well. From that time onward, we would always look for opportunities to help the work of God, and God has grown our business beyond our own desires.

Tell us more about being a Christian entrepreneur.

We have a happy staff who, although not all are Christian, sense the need we have to put Christ first in all we do. We barely ever lose any of our staff. I believe that here again God has led by bringing us into contact with the right people. I have had the honor of doing studies with some of our staff, and many have even gone through VOP studies. Some have even been baptized.

We continue to look for opportunities to support God’s cause. We have been a part of starting up a new church plant; we are active in helping several different organizations to reach those who are lost, and I never consider giving an expense. It is indeed a blessing to give wisely to the cause of Christ. This business we have we do not consider as ours. We are certainly beneficiaries of His grace, so it is His business that we have the privilege to manage for Him. Everything starts with giving, not what you have, but what He has provided. I do not give to receive, but I have been blessed through this process.

How does your partnership with God influence your way of doing business?

I don’t fear tough times, because I have the best Partner. Christ is the true owner of this business, so I need not make any decisions contrary to His guidance. We never engage in any activity that would make us do things that go against principle to get business. Honesty and integrity have been paramount. This is the clear instruction we give to all our staff. Our success is not dependent on the favors of humans. God is the owner, and I am entrusted by the most high God to manage His business. He guides us about how to treat people. The atmosphere prevailing in the office has certainly been our secret of success.During times when companies around us are struggling to stay open, we have grown. And we know that although we are not perfect by any means, we have been blessed, because God is in control of our day-to-day business. I know I can always go to my Boss, and He will give me time off to study His Word, to share His Word, and to spend His finances on furthering His work.

If there is one thing I have learned, it is to put God first, and He will do things beyond what you are able to imagine. 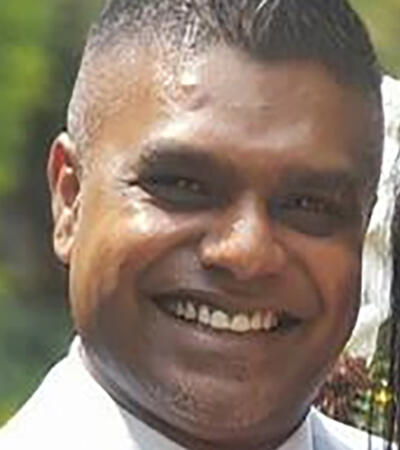 Chris Naidoo is Managing Director of Stargate Scientific, a lab equipment company based in Johannesburg, South Africa. This interview was conducted by Glenn Smithwick.