Quick—what do you think of when A MIRACULOUS you see the word “Tasmania”? Tasmania is a large island off the southeastern coast of Australia. The first known nonindigenous person to stumble upon Tasmania was Dutch explorer Abel Tasman in 1642, who gave the island its name. Tasmania has a relatively cool, temperate climate, comparable perhaps to New England in the United States or to southeastern Canada.

Seventh-day Adventists have had a presence in Tasmania since 1887, when two literature evangelists canvassed the city of Hobart with copies of Thoughts on Daniel and the Revelation. The organized Seventhday Adventist Church in Tasmania dates to 1900, when Tasmania was recognized as a mission, and in 1901, a conference. As of June 30, 2020, the Tasmanian Conference comprises 1,258 members worshipping, serving, and giving in 11 churches.

While the Tasmanian church is numerically small, it is mighty in spirit and generosity, as measured by its performance in terms of tithes returned and offerings given during the COVID crisis.

The returning of tithe has always been as much of a spiritual thermometer as an economic phenomenon. It reflects where we are spiritually, both as individuals and as a corporate group, because God demonstrates His trust in us by placing His resources into our hands to manage.

The graph below reveals that tithe in Tasmania has increased dramatically. In 2020, a COVID-19-affected year, the faithfulness of the members was evidenced in a 17.77 percent increase over the previous year. This has allowed more staff to be employed, both in the field and in administration.

When it comes to offerings, an alarming picture emerges worldwide, with offerings dropping significantly in 2020. However, this was not the case in Tasmania. Despite expectations, offerings in our conference as a whole increased by 45.25 percent over the previous year, with major increases in ADRA support, Sabbath School Offering, Annual Sacrifice Offering, Camp Mission Offering, and the World Mission Budget, to name just a few.

According to Cosmin Dan-Marica, the chief financial officer of the Tasmania Conference, “We do not know exactly why our offerings have increased so much in 2020. But my heart was touched when the Conference Executive Committee, seeing that God has blessed with such an increase in tithe, voted to donate $10,000 toward the Global Mission Budget Offering, which supports the wages of missionaries around the world.”

Dan-Marica attributes some of the increase to the church treasurers, who often collected tithes and offerings by making visits to private homes when churches were closed under Tasmania’s gathering restrictions. She goes on to say, “I know that God was honored by their efforts, and we thank them.”

This was also an important moment demonstrating the usefulness and effectiveness of the system of online giving developed by the South Pacific Division (SPD) several years ago. Even many previously technology-shy people began to adopt e-giving through both the website and the specially developed mobile app. According to Dan-Marica: “This was a real blessing, and we would like to say thank you to SPD for the efforts that have been put into developing the e-giving platform. The year 2020 has reiterated to us the firm conviction that this is the church of God, and that the finances and resources will flow as He sees fit. We give Him praises and glory.”

Rajko Celic, a pastor in Mort West Tasmania, writes that the faithfulness of the members so blessed the church that they were able to make long-needed improvements in church facilities in order to better serve their communities. “For example, during the time, the members of Ulverstone SDA Church managed to raise additional funds for upgrading their kitchen. This is a big endeavor for a medium-sized church. They were generous and supportive in this project, and members continued to faithfully return a tithe to the Lord. Praise the Lord. God is good.”

Pastor David Leo was surprised and gratified to discover that “despite the challenges of conducting church online, the tithes and offerings in Devonport and Deloraine churches were consistent and even increased. The majority of our church members were not too familiar with egiving, and so they organized to have their tithes delivered to the church building, where one of our deacons and treasurers collected the money. Where the members were unable to get to the church, the deacon and treasurer would visit the home. Our members were faithful in setting aside their tithes and offerings to return to God. This was a strong indication that the folk in this conference are resilient and that they believe in our God, who will provide all that we need according to His riches and glory by our Lord Christ Jesus.

Without doubt, all of us have faced challenges over the past year, both corporately and as individuals. Some of these challenges have been economic. Others have been emotional or spiritual. However, the example of Tasmania is evidence that God still watches over His faithful people and wants us to survive and thrive as we trust Him and His promises.

The Melanesian island nation of Fiji lies in the South Pacific, about 2000 kilometers north of New Zealand. It consists of approximately 330 islands, formed mostly from volcanic activity. Of these, 110 are inhabited. Eightyseven percent of the nation’s population of 887,000 lives on the two major islands, Viti Levu and Vanua Levu.

The Seventh-day Adventist work in Fiji dates to August 3, 1891, when the missionary ship Pitcairn landed in the capitol city of Suva. Today, the Fijian Mission consists of 28,075 members worshipping and serving in 166 churches. Fijian Seventh- day Adventists today are confronting and prevailing against the challenge of a global pandemic.

Fiji went into COVID-19 lockdown in March 2020 when the virus arrived and began to spread. Churches, schools, and businesses were closed in order to arrest and contain the outbreak. After a month of this, we realized that the closings and restrictions would be in place for the foreseeable future. Church and other gatherings remained prohibited, and we began to feel the financial impact. Tithes and offerings from local congregations declined. Church leadership met and revised budgets and implemented pay cuts across the denominational workforce, but the Lord showed His faithfulness through this time.

The Lord had prepared us well in advance. Our division/union financial support enabled Fiji Mission to air television and radio content at no cost, and this would prove to be a game changer for us. Planned public evangelism programs and church services were modified to be done virtually. This enabled us to reach both our members and the general public in new ways. Hope TV had access to a free-to-air government platform, allowing us to bring the gospel to every home. Our Hope at Home programs aired on television every Sabbath, as well as on FIJI the Internet around the clock. Programs in local languages were posted to You- Tube and other social media platforms, greatly extending our reach.

The online and virtual programs touched the hearts of many Fijians and made it possible for faithful members to generously return tithes and give offerings to the mission. By September 2020, we were able to revise our budget again, refunding the pay cuts across our workforce. God has shown us that He is faithful even during lockdowns and pandemics. We praise God for His faithfulness; Fiji Mission recorded the highest tithe in its history in 2020. Fiji Mission even opened a Hope Clinic in the city of Suva during the pandemic, without financial losses. Challenges continue, but God has been faithful. Even in the midst of crises, God finds people and resources to continue His work. As I write, Fiji is into its sixth week of lockdown, and we are enduring our second wave of the virus. Our 2020 experiences taught us many lessons. We have not revised our budget, but we are watching it. Thus far, we have not felt the need to again implement pay cuts. We continue to trust in the Lord and His faithfulness.

Our God is good and awesome! £ 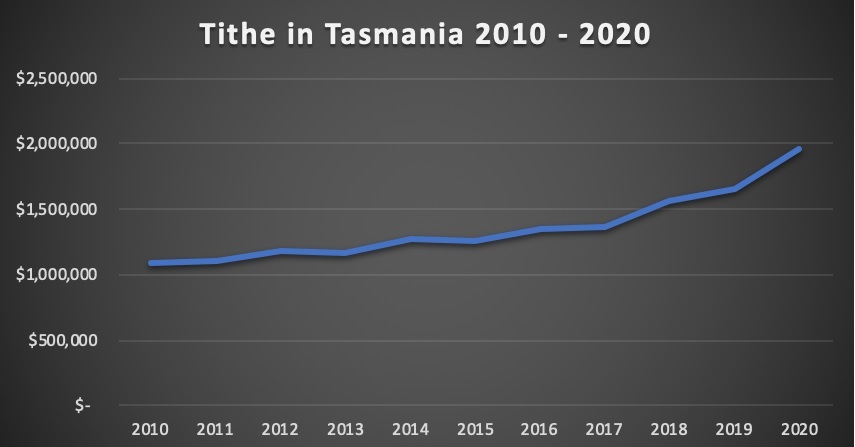 Uplifting Generosity During A Global Crisis