I grew up on a farm in Oklahoma that raised registered Jersey cows. They are known for their pretty fawn color and beautiful brown eyes. They’re also noted for producing the best milk with the most cream.

My parents milked 60-80 cows every day in an old-style stanchion barn. Mother loved her cows and knew them each by name since she did most of the milking herself, spending six to eight hours with them each day. Milking cows was quite an experience and backbreaking work. It required bending over repeatedly to wash and dry the cows’ udders and attach the milking devices. Then the process began all over again whenever a cow kicked off a milking apparatus that needed to be reapplied. Not surprisingly, my dad used to say, “EverythingI have, I owe to udders!”

For 50 years, my parents ran that dairy farm. Mom was 83 when my parents finally sold the cows. Through the years, they had many cows—mostly Jerseys and a few black Angus. In the spring, when new calves were born, it was exciting to watch them grow from heifers into milk-producing cows that would, in turn, produce more babies.

In all those years, I remember only one set of twin calves ever being born. It is considered a rare event when a cow has more than one calf at a time—some would call it historic. So you can imagine my surprise when I heard the most amazing story from one of our AWR listeners in Tanzania—a nativeMaasai who began paying his tithe with cows. What happened next astonished everyone around him and is nothing short of a miracle. Read on . . .

The miracle of the tithed cows

During a recent visit to Tanzania, I met Abraham, a wealthy Maasai cattle owner who shared his remarkable story with me. About a year earlier, he had attended a series of evangelistic meetings and decided to be baptized. He had never learned to read or write, so when he discovered our new AWR station in Tanzania, he was overjoyed and regularly listened to the programs on his radio.

As he listened, he learned many new things about being a faithful Adventist—from how to live a more healthful life to the importance of returning an honest tithe. Since Abraham owned more than 1,000 head of cattle and large herds of sheep and goats scattered over Tanzania and Kenya, he decided that he would strive to be faithful with all his holdings.

So he placed his cattle in large pens and counted them as they walked through a chute. He counted cows one through nine as they went through the chute. The 10th cow, however, Abraham dedicated as tithe for God. As time went on and Abraham continued to reserve every 10th animal for God’s tithe, his friends and acquaintances were amazed. In their culture, people’s wealth is measured in cattle. One doesn’t just give away his cows! As Abraham’s friends watched him repeatedly go through the numbering process with more of his cattle, they began to mock him. For some, Abraham became a laughingstock as many people declared him to be crazy.

But the laughter abruptly stopped nine months later when 40 of Abraham’s cows gave birth to twins! In addition, many of his goats and sheep birthed triplets! God was blessing him as He had Jacob, Abraham’s grandson from the Bible. It was God who blessed Jacob’s livestock so they multiplied, and it wasGod who was now blessing this modern-day Abraham.

Doubled tithe and another miracle

Abraham and all the Maasai who mocked him were learning that with God, nine-tenths goes much further than keeping the whole amount for oneself! Now Abraham was so happy with how God was blessing him that he decided to give double tithe! So, when counting, this Maasai herdsman stopped at eight cows, which he kept for himself. Then he gave the ninth and 10th cows to God. And God blessed Abraham even more! I have seen many times—to put it in farming terms—how God’s scoop shovel is bigger than ours. One simply can’t outgive God!

But there is more to this story, for God’s blessings also come withripple effects.

On open ranges, such as those found in Kenya and Tanzania, thieves often steal cattle. But something interesting began to happen in Abraham’s situation. Whenever any of his livestock were stolen, the animals always found their way back home. They inevitably returned to Abraham’s herds as if unseen hands were guiding them. It has now gotten to the point where potential thieves have become very nervous about stealing Abraham’s livestock!

Recently, the president of the Tanzanian Union Mission of Seventh-day Adventists, Dr. Godwin Lekundayo, told me that many of those who had mocked and laughed at Abraham now “want in” on the same blessings he has been receiving.They told the Adventist pastors, “We want to tithe, too, just like Abraham is doing.”

“But you’re not members of the Adventist Church,” the pastors replied in surprise. “We don’t care! We want God’s blessings, so we wantto pay tithe with our cows, goats, and sheep as well!” theyinsisted.

In a village near where Abraham lives, a local chief built apond. During the dry seasons, he charges other Maasai cattleowners to water their stock there. One day, Abraham had an inspired idea. He decided to build a larger pond and let the cattle owners water their cattle there for free. He also hired a Bible worker to preach to them about Jesus while they water their animals. The cattle owners are so grateful for the free water that they gladly listen to the messages!

People are so impressed by Abraham’s testimony and generous spirit that many have expressed a desire to belong to Abraham’s church. This is very significant, as the Maasai are traditionally reluctant to convert to Christianity.

But Abraham’s testimony is more powerful than tradition, and many Maasai also listen to the AWR360° programs on their radios. 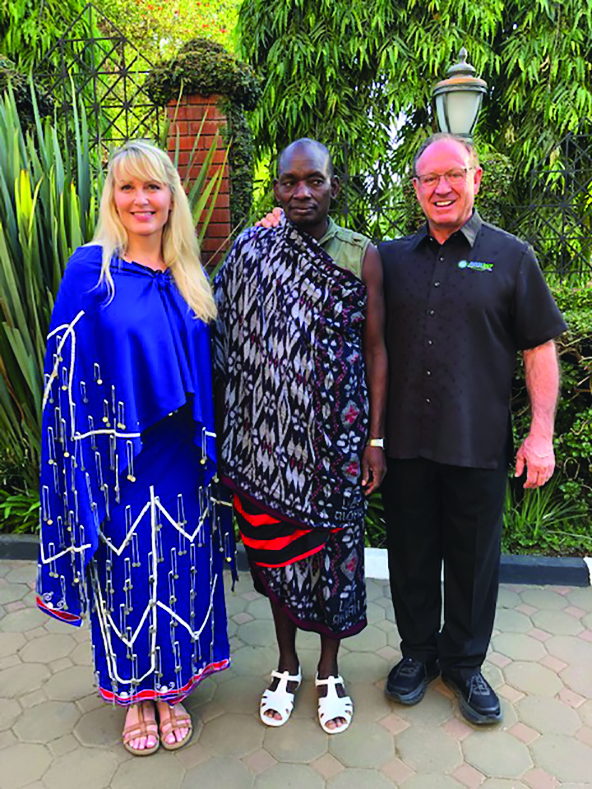 They have been surprised to learn that Adventist Christians have some beliefs in common with them. For example, the Maasai have traditionally believed in God and not in ancestral worship or witchcraft. They also believe that when a person dies, they simply go to sleep. This shared belief has helped them open their hearts and minds to receive the full Gospel message.

So far, thanks to Abraham’s testimony, 35 Maasai have accepted Jesus and been baptized. And they all listen to Adventist World Radio!

When Adventist World Radio installed the radio station in Tanzania to reach the many Maasai tribe members in that area, we never dreamed of the impact this presence would have on Abraham. We didn’t even know Abraham. But God knew him, and He knew this sincere man was waiting with a ready heart to listen and receive the full Gospel message—a message that would take him from “broadcast to baptism.”

Thank you for supporting the work of Adventist World Radio. There are many people like Abraham waiting and ready to hear God’s voice and respond along with us, “Here I am.Send me!”