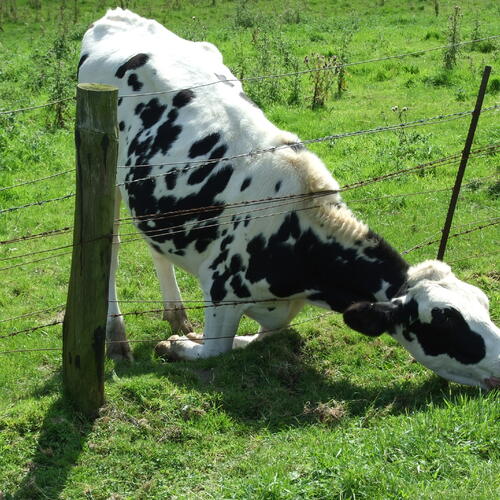 The Beveridge Paper Company learned that one hundred years ago the average American had 70 wants. A similar survey was done a few years back, and the result showed that their grandchildren had nearly 500 wants on their lists.[1] As people become more and more discontent, they strive to find contentment in material things, position, or social status.

What is discontent? A cartoonist described discontent in a cartoon, showing two fields divided by a fence. Both fields were about the same size, and each had plenty of the same kind of grass: green and lush. In each field there was a cow, and each cow had his head stuck through the fence—eating grass from the other cow’s pasture. All around each cow, in his own field, was plenty of grass; yet the grass in the other field seemed greener and fresher, even though it was harder to get. In the process of getting the other cow’s grass, the cows were caught up in the wires and unable to free themselves. The cartoonist put just one word at the bottom of the cartoon: “Discontent.” Many times we tend to have the same attitude of discontent; we see others as more fortunate than ourselves.

What is contentment? Dictionaries defines it as a state of happiness and satisfaction. The Bible describes contentment as being next to godliness: “But godliness with contentment is great gain” (1 Tim. 6:6).[*] The apostle Paul summed it up in Hebrews 13:5: “Be content with what you have.” The bottom line is: be satisfied with what we have, not desiring something more. Lao-Tzu, an ancient Chinese guru, said, “When you are content to be simply yourself and don’t compare or compete, everybody will respect you.”[2]

Now the question is, in what situations must we be content? Paul says in Philippians 4:11, “For I have learned to be content whatever the circumstances.” Paul had learned three specific principles about contentment that he wanted us to learn as well: (1) Appreciate the needs of life—“But if we have food and clothing, we will be content with that” (1 Tim. 6:8); (2) Simplify the lifestyle—“I know what it is to be in need, and I know what it is to have plenty. I have learned the secret of being content in any and every situation, whether well fed or hungry, whether living in plenty or in want” (Phil. 4:12); (3) Trust the Lord—“Be content with what you have, because God has said, ‘Never will I leave you; never will I forsake you’ ” (Heb. 13:5). God will never forsake us provided we put our trust in Him, return the tithe faithfully, and give our offerings generously.

Benjamin Franklin said, “Who is rich? He that is content.” If all of us want to be “rich,” being content is something we should learn.