In our contemporary world, the word “prosperity” is often associated with the amount of money or the value of stocks a person owns. There are today so many means to grow our money that it is almost impossible for a common person to have command of the necessary knowledge. New and exotic words such as “bitcoin” or “cryptocurrency” regularly come up in everyday conversations. There is virtually no domain in today’s world in which money is not involved. If in past times financial transactions were simple (buy, sell, exchange, market), today it is a complex scenario that must be described in mathematical formulae rather than words.

In our world today, money moves not only from hand to hand, as in past times, but from account to account, server to server, encrypted, wrapped in binary code, at unimaginable speeds, with dramatic effects. Coming back from the clouds, money affects our world, dividing it among first, second, and third world countries. There are specialists who seem to fully understand how this complex mechanism works and know how to manage it to produce advantages or dividends. Many times, the key verb is “investment.” Investments don’t always work as expected, so every year there are surprises, ups and downs in currency that translate in the real world to poverty or wealth. Some specialists are seen as financial geniuses, others as scammers, depending on what they’ve done lately. In recent decades there’s been a surge in “specialists” promising infallible methods to ensure financial prosperity.

Prosperity theology (PT) is a religious belief held by some Christians, who affirm that financial blessings and physical well-being are always God’s will toward them, and that faith, positive speech, and giving to religious causes will increase their own wealth. This theology sees the Bible as a covenant between God and humans; in other words, if people have faith in God, He will provide security and financial prosperity. The core of such theology is the belief that God wants His faithful people to have a prosperous life, which means that they will be financially rich, physically healthy, and individually happy. This type of Christian lifestyle places the well-being of the believer at the center of prayer and transforms the Creator into one who makes their thoughts and wishes a reality. The danger with this type of religious anthropocentrism, which puts humans and their well-being at the center, is that it transforms God into a power at our service, the church into a supermarket of faith, and religion into a utilitarian, sensationalist, and pragmatic phenomenon.

Although this ideology might seem new, it bears a suspicious resemblance to pagan Roman religion, reflecting the social contract at the heart of the Roman empire. “The innominate contracts were characterized in ancient Rome in the following way: ‘dot ut des’ (I give [you] and you give [me]); ‘dot ut facias’ (I give and you do); ‘facio ut des’(I do and you give); ‘facio ut facias’ (I do and you do). The ‘do ut des’ (I give/ you and you give/me).1  principle is the main characteristic of Roman Empire’s pagan religion and expresses the reciprocal contract between human beings and deity, highlighting the importance of giving as a mutual obligation of ancient (and specifically Roman) society. The gifts offered by the individual take the form of a sacrifice, with the expectation that God will return something of value, which in turn will provoke gratitude and additional sacrifices in a perpetual cycle.2

It is a compensatory religion in which the purpose is to resolve crisis through divinity.

The analysis of some of the worship services from PT preachers reveals a similar mechanism that can be systemized as follows.

A simple analysis of the PT concept shows theological problems with the system. First, the purpose of God’s salvation plan does not contemplate financial redemption, but moral redemption. Jesus promises the forgiving of sins, not the restoration of bank accounts. Second, an anthropocentric displacement emphasizes generosity and donations as the cause for blessings. In this manner, God turns into a conduit for blessings, not the fountain of blessings. The biblical concept is that God and His grace are the fountain of blessings for the faithful and unfaithful. “But I say unto you, love your enemies, bless them that curse you, do good to them that hate you, and pray for them which despitefully use you, and persecute you; that ye may be the children of your Father which is in heaven: for he maketh his sun to rise on the evil and on the good, and sendeth rain on the just and on the unjust” (Matt. 5:44, 45, KJV). Third, PT introduces the idea of a compensatory relationship between human actions and divine grace.

Even though promoters of PT base their system on Old Testament texts, there is no conceptual link with the biblical view of stewardship. A serious exegesis of the biblical text demonstrates that in the Old Testament, prosperity was not linked to the idea of offerings from worshipers offered to God, but with obedience and faithfulness in regard to the Creator. If there is a link between blessing, generosity, and offerings, this is totally different from the PT proposal. PT makes the offering the cause of blessings. On the contrary, in the biblical world, blessings are the cause of thankfulness and giving. The tithe and offering system is based on a relationship type of worship, not an exchange.

The core of the biblical stewardship system is summarized in the rhetorical question from the psalmist: “What shall I render unto the Lord for all his benefits toward me?” (Ps. 116:12, KJV). It is clear that the awaited answer is not expressed in terms of compensation or exchange, but in an attitude of worship and faithfulness to God, which is the purpose of biblical stewardship. “I will take the cup of salvation, and call upon the name of the Lord” (Psa. 116:13, KJV),

The contrast between prosperity theology and biblical theology is evident. While the former sees giving as a type of investment in anticipation of a future dividend, biblical theology views giving as the reaction, the result of contemplating past blessings from God. It’s the difference between INVESTING and RETURNING.

At the beginning of this article, I mentioned that we often measure prosperity in terms of money. This creates a false perspective that is measured quantitatively, that promotes a market-type model of exchange, where the objective is to INVEST, WIN, ACCUMULATE. The biblical model promotes a different perspective. Prosperity is a type of relationship. GIVING does not mean losing, but it does mean WORSHIP, GIVING, GRACE, HELPING.

The attempt to define the cause-and-effect relationship between generosity and blessing is not an easy task. We face two mutually opposing systems: One proposes generosity as a cause for prosperity and blessings. In other words, “Do ut des” (give to receive). The other proposes blessings as a cause of prosperity and generosity. In other words, “I give because I have received.” It is not an easy decision to make. It is choosing between “dividends” and “worship.” Before making a decision, we need to remember that heaven’s mathematics has its own paradox. “It is more blessed to give than to receive” (Acts 20:35, KJV). We need to remember that “the kingdom of God is not meat and drink; but righteousness, and peace, and joy in the Holy Ghost” (Rom. 14:17, KJV). 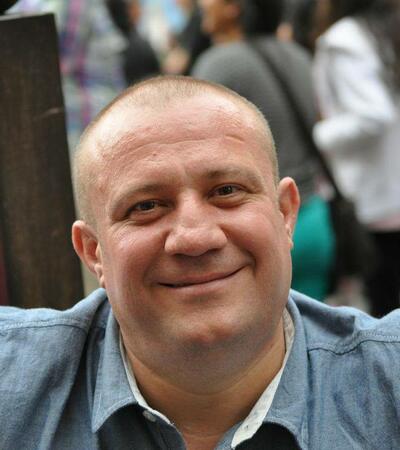 Laurentiu Gabriel Ionescu was born in Romania on May 17, 1974. He discovered the Seventh-day Adventist Church and was baptized in 1990. He worked in Romania and Argentina as a pastor and professor at the Faculty of Theology. He currently works as a pastor in Zaragoza, Spain, and as associate director in the Department of Stewardship in the Spanish Union.