I don’t remember the first time I returned the Lord’s tithe, but I know what influenced me initially to do what I now consider a normal and regular part of being a member of the Seventhday Adventist Church. Here’s how it happened for me.

Growing up in a pastor’s home, I was made aware very early in my childhood of certain practices of the church; one of those routine exercises was the returning of tithe and the giving of offerings. Back then, I accepted the tithing ofmy father’s income (sole income earner for the family) and other gifts as a collective response of the family (tithing unit). Usually, it was done in the context of Sabbath worship. I did not fully understand the rationale behind such a practice or even the differences between tithe and offerings. But I knew that there was regularity to the practice; and my parents, who were leaders of our household and the local congregation, considered it a joy to be able to fulfill these faith responsibilities. And so from a very early age, I observed with keen interest these acts of faithful giving, and what I saw in my parents’ financial stewardship made an impact on my young mind.

There was another powerful image of how stewardship education was done in my parents’ home, which also had a lasting impression on me. Our parents taught us the value of work and included us, when opportunities and situations were right, to cultivate the land as a way of supplementing Dad’s wages. And so when fresh produce was sold in the neighborhood or local market, it was my mother’s practice to put aside cash in two empty bottles with labels. These were placed somewhere in the house where they were visible to the whole family. The labels on these two bottles were “Tithe,” where 10 percent from the sale would be placed; and “Offerings,” where money was set aside to be distributed later in the week for everyone to take to church Sabbath morning. As children we learned from our parents’ example, and the religious education taught in our home that certain things, namely tithe and offerings, were holy and belong to God.

As parents now, my wife and I are teaching these same principles and practices to our children, with a prayer in our hearts that they will grow up to honor God by returning to Him what is rightly His in tithe and giving Him their offerings of gratitude.

I was 12 when a team of ministerial students and their director of theological education from the region’s union college came to my town. They conducted a major evangelistic program and made quite an impact in the community. Many people came to know about the Seventh-day Adventist Church because of this event. As a young person, I was impressed with the program (the organization and the preaching), and I was also moved by the Spirit. At the end of the public campaign, I made my decision to give my life to Christ and was baptized, and I became a member of the church in my home country.

One of the lessons that I learned at the time through Bible studies was that God expected His people (the Church) to return tithe and give Him offerings of thanksgiving (Deut. 16:16). Again, I did not have all the biblical knowledge on the subject of tithing and giving, but there was sufficient informa tion provided to convince me of this truth. Now, there was also a a new dimension to tithing, and that was the connection to the mission of God in the world. This idea of returning tithe and giving to a global cause—the proclamation of God’s good news of salvation around the world—excited my heart. I thought: I’ve got it! The returning of tithe and the giving of offerings (and there were many different mission offerings promotedthrough Sabbath School then) is about my participation in God’s mission.  This was an opportunity for me as a member of God’s church to make a financial contribution out of His blessings to  what matters to God: reconciling people to Himself. And so after my baptism, the returning of tithe and my giving of offerings became more intentional and had a mission focus.

As I grew in age and in my faith journey, I became much more aware of the “whys” of tithing. My knowledge of financial stewardship evolved over time, and it was a process of discovery. More important, it became obvious to me that tithing is not about me; instead, it’s about God as Creator and Redeemer. For example, when I return tithe I’m acknowledging God’s ownership of the universe, and I also accept that He is the Creator of the world (Gen. 1:1). In returning tithe I’m reminded that everything that I have in this life, including my own family (wife and children), belongs to God (Acts 17:28). My very existence, even in the present, is an act of the Creator and an expression of His grace (Ps. 139:13, 14).

Now in addition to the other biblical principles that undergird the Bible’s teaching on tithe, I was also convicted of the “Lordship of Jesus,” which has continued to challenge and sustain my obedience in returning tithe. Let me explain: I accept that God saved me in Jesus Christ, and I’m now in a personal relationship with Him. And a key part of this spiritual relationship is the awareness that the good things I do in this life—which include tithing—are a manifestation of God’s work in me (Gal. 2:20). When I read these words of Jesus: “But seek first his kingdom . . . ,” I’m hearing God say to me, “Let Me take control of your life.” And by releasing the control of my being to Him, I’m also giving God permission to manage all of my human affairs, including the stewardship of my personal finances. In this way, the returning of the tithe is a demon stration of my absolute trust in God and my conviction that I belong to Him. Tithing is about my relationship with Him and my worship of the One who first loved me and gave Himself up for me (1 John 1:19). 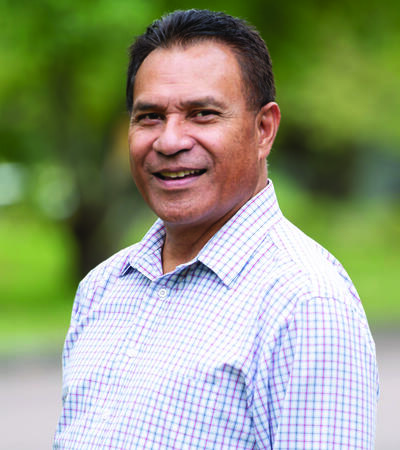 Dr. Erika Puni is a theology lecturer and Ministry Practicum director with Avondale Seminary, Australia. His wife Maxine is an accountant with the Treasury Department of the North New South Wales Conference, Australia, and they have two children: Janae-Grace and Jaydon.