If you grew up in Monterrey, Mexico, as I did, you cared a lot about soccer. And if you cared about soccer, and you lived in Monterrey, you supported one of two teams: CF Monterrey or Club Tigre—but not both. Even though both were local teams, a fan who couldn’t decide was not a fan at all in the eyes of most people, but rather a pseudo-fan.

I made my choice for CF Monterrey in 1990, when I was 13 years old. My older adult cousin, Poncho, invited me to a match between CF Monterrey and the Millonarios de Colombia. One of his friends had backed out at the last minute, and it was an offer I could not refuse. When game day came, Poncho and his friends arrived in a pickup truck, fully decked out in CF Monterrey apparel—both the people and the truck.

Once in the stadium, the match started. We clapped, shouted, chanted, and even high-fived people we didn’t know and would probably never see again. At that moment, as we rejoiced over CF Monterrey’s two-goal win, we were one family. That night, I became a self-proclaimed CF Monterrey fanatic. In the years since, CF Monterrey has brought me both joy and sorrow. But my loyalty has never wavered, and to this day I wear the CF Monterrey jersey with pride. If you want to instantly bond with me, ask me about my favorite soccer team.

The Worship of a True Disciple

At this point, you may be thinking: “Nice story, Tony! But what does it have to do with discipleship or stewardship?” Well, discipleship and stewardship—both aspects of Christian worship—is a lot more like soccer than you may think. In Monterrey, we didn’t just love soccer. We loved one of the two local soccer teams, but not both. The same holds true for Christians in regard to Christ and the world. God doesn’t want pseudo-disciples, any more than Monterrey soccer clubs want pseudo-fans. God wants disciples who are unwaveringly loyal to Him, and the Bible makes it clear that God’s disciples are distinguished by their worship.

What is the nature of the worship that distinguishes a true disciple from a pseudo-disciple? First, true worshipers of God hold nothing back. They do not share their worship with anything other than God, just as the true fan of one of Monterrey’s local soccer teams does not also cheer for the other team. Second, the true worshiper of God worships God through actions that make his or her loyalties obvious to the world watching. Just as the true fans of CF Monterrey wear the team’s colors and deck out their vehicles in CF Monterrey gear, Christian worshipers make their loyalty obvious every time they interact with others in speech or action, and perhaps most importantly, in how they dispose of their worldly goods.

One of the most important things that distinguishes the true disciple from the pseudo-disciple is the recognition that everything they own comes from God, as well as their willingness to put it fully at God’s disposal. In the Old Testament, this attitude was expressed through sacrifice. Worship through sacrifice came first, not last, as we see in Genesis 8:20. The first thing Noah did when he left the ark was to build “an altar to the Lord and, taking some of all the clean animals and clean birds, he sacrificed burnt offerings on it.” Such acts of sacrifice were worship to Old Testament believers, as seen in Genesis 22:5 (NIV), where Abraham says to his servants “Stay here with the donkey while I and the boy go over there. We will worship and then we will come back to you.”

The Exclusivity of Worship

So we see from these examples that worship is not an idea, or even a feeling, but rather an action—an action that stems from the worshiper’s acknowledgment of God’s glory, and the worshiper’s absolute dependence upon and indebtedness to Him.

Another important thing to note about true worship of the true God is that it is radically exclusive. “The Creator of the universe is the true and only object of worship. No man, no angel, is worthy of worship. This is the prerogative of God only. Creatorship is one of the distinguishing features of the true God in contrast with false deities (Jer. 10:11, 12).”1  Only God deserves our worship. Our worship is of no value if it is shared with someone or something else.

The Totality of Worship

The absolute and total nature of true worship is seen in the sacrifices made by Old Testament believers. When presenting sacrifices to God during Old Testament times, the person would lay the whole lamb on the altar, symbolizing the surrender of their life to God. The apostle Paul explains the relevance of this to New Testament believers: “Therefore, I urge you, brothers and sisters, in view of God’s mercy, to offer your bodies as a living sacrifice, holy and pleasing to God—this is your true and proper worship” (Rom. 12:1 NIV).

What the apostle Paul is saying is, if we have not surrendered our life as a whole (most definitely including all that God has given us: time, talent, treasure) we haven’t really worshiped—even if we go through the motions of church attendance and the appearance of the Christian life. God says that He wants us to present our lives before Him. He calls this our true and proper worship. We see that true worship is not only a matter of loyalty but first and foremost a matter of the heart.

As I visit the more than 170 church groups throughout the Potomac Conference and encourage our members to commit their hearts to Jesus, I have become aware that the giving of tithes and offerings is perhaps the most revealing and polarizing moment in the Sabbath service. I see varied reactions, ranging from joy and eagerness to inner turmoil and avoidance. A lot of people seem to remember the need for proper hydration and rush off to the water cooler. Others remember that urgent text or call to which they must respond right this very moment.

Nothing reveals the true nature of our relationship with God more than what we do with our money. In a very real sense, our money is our life. Think about it: at least a third of our time is spent acquiring it, a third of our lives really. Our work, even if it may not always seem significant, makes use of our God-given talents in order to earn that money. We use the physical strength and stamina we have received from God to put our time and talents to use. Finally, as the old adage goes, “You have to spend money to make money.” How much do you spend on transportation to and from your job, for example? In Matthew 6:21, Jesus says “For where your treasure is, there your heart will be also.” One could just as easily say “Where your treasure is, there your life will be also.”

Ellen G. White states, “There are only two places in the universe where we can place our treasures,—in God’s storehouse or in Satan’s; and all that is not devoted to God’s service is counted on Satan’s side, and goes to strengthen his cause. The Lord designs that the means entrusted to us shall be used in building up His kingdom. His goods are entrusted to His stewards that they may be carefully traded upon, and bring back a revenue to Him in the saving of souls. These souls in their turn will become stewards of trust, cooperating with Christ to further the interests of God’s cause.”2

There are two camps (or teams, if you will) soliciting a life commitment. On the one hand, God, our Creator, and Redeemer; on the other, the world, the flesh, and the devil. When we return our tithes and offerings, we are telling God, “I trust and obey You with my life,” and we are committing ourselves to Him as the true and only object of our worship.

So where is your life? To what or whom are you committing it? Are you trying to support two teams? Are you a pseudo-fan? Or is the seal of God imprinted on everything you are and everything you own, like (for example) the colors of CF Monterrey on the clothes and vehicles of the truly committed fan? If you are still trying to decide, God is calling you to give everything you have and are to Him. Trust Him. He will make it more and better.

You may want to do this, and you may be wondering what the first step is. Try joyfully returning a faithful tithe and offerings! As God said in Malachi 3:10, “‘Test me in this,’ says the Lord Almighty, ‘and see if I will not throw open the floodgates of heaven and pour out so much blessing that there will not be room enough to store it.’” 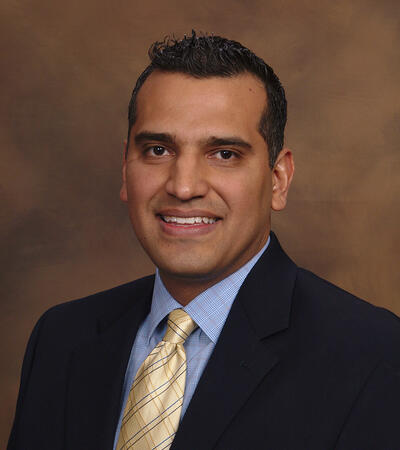 Tony Reyes has worked for the past 11 years alongside church members and administrators in various aspects of stewardship. He currently serves as Stewardship director for the Potomac Conference.