You Do Not Realize What You Have 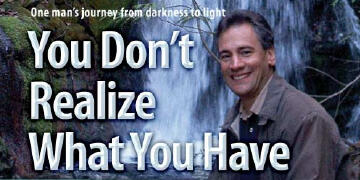 You Don't Realize What You Have

Larry Pirraglia grew up Roman Catholic, and became an Adventist after attending NET ’96 meetings. I have been so impressed with his enthusiasm and love for his church. And, I must admit, I have been a little envious. As a fifth-generation Adventist, even though I have always loved the Lord and my church, I have never felt the excitement of a newfound faith such as he has. So as his friend and fellow church member, I decided to interview him.—Pauline Pierson, Collegedale, Tennessee.

PIERSON: How and why did you become an SDA, and how do you feel about the church now?

PIRRAGLIA: I was raised a Roman Catholic, but must admit my family was pretty nominal. At 14 I was studying the catechism for confirmation. It was there that I learned about the Sabbath. I also studied Italian, and learned that Saturday in Italian is sabato. Both of these facts left an impression on me. I began to wonder why the Catholic Church kept Sunday, but put it out of my mind until years later when I met a Seventh-day Adventist young woman at my workplace. She impressed me by her modest dress and kind and friendly deportment. On our second date, she invited me to church on Sabbath. Then I remembered what I had read in my confirmation class years before. What impressed me was their simple service, their study of the Bible, and the meaningful hymns they sang.

So when did you join the Seventh-day Adventist Church?

I attended the NET ’96 series of meetings by Mark Finley that were held at the local church. I was convinced as Mark shared the history and prophecies of the Bible that this was truth. Everything made so much sense! I was so thankful that one couple reached out to me and encouraged me. They helped tremendously to ground me in the truth. From my own experience I know how important personal contact is, just as Jesus did in His ministry.

What were your thoughts on the writings of Ellen G. White?

Before becoming an Adventist I was studying an eastern religion and was interested in health. So when my friend gave me The Ministry of Healing, I read it and thought it was a modern author. When I realized that she lived more than 100 years ago, I was convinced that she was inspired of God. I was completely open and receptive. What I find interesting is that much of what she wrote 100 years ago is now being proven by science.

Reading her writings has settled me in the faith as I’ve seen the validity of them become even more relevant for today. After 10 years, I still believe with all my heart that she is a prophet of God for the end-time church.

It’s been like coming out of a long winter into spring after 32 years of darkness and confusion! I grew up being educated in a theistic evolution setting, not knowing where I came from, my purpose in life, or where I was going. The Bible and the Holy Spirit’s leading have answered all of these questions for me in a beautiful way. I felt as if I had finally found what

I had been looking for all my life. Jeremiah 29:11 says: “‘For I know the thoughts that I think toward you,’ saith the Lord, ‘thoughts of peace, and not of evil, to give you an expected end’” (KJV). We have so much to look forward to!

My journey has been quite a roller-coaster ride. The devil wasn’t happy with my decision, and shortly after being baptized I experienced discouragement and depression. But I want to encourage new members to hold on tight to the Rock, Jesus Christ, for He will carry you through. Shortly after joining the church I was still living for myself, and was quite materialistic—until I went through Hurricane Fran in eastern North Carolina. That woke me up, and made me realize the things of this earth are not as important as they used to be.

Thankfully, soon after I was baptized the church members gave me opportunities to help with various responsibilities. I’ve learned the importance of getting new members involved in areas in which their talents can be discovered and put to use. We are created in God’s image, and one of His characteristics is to reveal His goodness and truth. As freely as we have received, we should freely give. In order to stay alive spiritually we must give. And as a people we have been given much. Thus, much is expected of us.

What are some of the ways you’ve seen God leading in your journey?

When I visited the Chattanooga/Collegedale area, I applied for a position in computer technology. The job was offered to me before the weekend was over.

I now realize God had another reason for bringing me to this area. I met Naomi at church, and soon realized we were neighbors! It is truly amazing to see how God has brought us together, and united us in marriage in 2004. As a lifelong Adventist she gives me a different perspective, and has blessed me by her influence. One thing that stands out in my mind as I look at our different backgrounds is the way she lives to bless and serve others. This is in contrast to how my life had been. She gives me support and encouragement, and I’m eternally grateful that we are now on this journey together.

What do you think of some of the changes that you’ve seen in the church?

As I’ve read Adventist history I am concerned that if we don’t learn from our past, we are destined to repeat it.

For example, shortly after I was baptized the pastor shared the sanctuary message during prayer meetings. As a new Adventist I was amazed at the beauty of the gospel through the sanctuary. This is something that is not preached and talked about as it should be. We also need to hear more sermons that are distinctly Adventist, such as the investigative judgment, end-time events, and how they apply to our lives. We have a message to share with the world. In addition, while the writings of Ellen G. White should never replace the Bible, we have been given a unique and precious gift from God to guide us on this journey. We have nothing to be ashamed of in sharing what God has given us.

Last, the Sabbath is a precious gift to us, and something I’ve treasured ever since I’ve learned of it. I long for deeper conversations and spiritual fellowship on the Sabbath with my brothers and sisters in the faith.

What would you like to say to your Adventist brothers and sisters, and especially those who have been Adventists all of their lives?

You don’t realize what you have.