The little Christian school had struggled for years in the predominantly Muslim Middle Eastern country to which my friend, a missionary from South America, had been called. Few attended the school, and the locals felt that the presence of a Christian school was a disgrace to them. They expressed their displeasure by dumping their garbage on the school grounds every night without fail. Just as reliably, the South American missionary would emerge every morning and clean up the garbage.

While previous approaches had failed, our missionary friend trusted that Christ’s incarnational model of mission-humbling Himself to come among His children and experience suffering and shame (Phil 2:5-8), would somehow trigger a breakthrough. He felt that if he was to gain the people’s trust and exert influence on them, he had to humble himself and clean up the garbage of the people. He had already resolved to give all as a thanksgiving offering to the Lord. It was obviously difficult to leave behind the security of his home and venture into the unknown, a place where he knew little of the people or their culture. Yet, he had to humble himself even more than he had imagined he would. For years he would wake up every day at 4:00 a.m. and clear the rubbish stacked almost two meters high alongside the wall of the school.

To really know people, one must engage with the “rubbish side” of their lives. In time he started to lose sight in his left eye. However, nothing could divert him from this task. He was convinced that God would break through in this humble way. He was willing to sacrifice ego and status in order to fulfill God’s purposes.

The result: what was previously unthinkable happened. The local people were moved by the foreigner who was silently—without remonstration—disposing of their garbage. Eventually, the villagers ceased dumping at the school and even entrusted their kids to the missionaries. Often, the greatest barrier in mission is not within the people we want to reach, but our failure to properly embody God’s compassion and generosity (Matt. 12:7; Isa. 1:11-17).

This testimony is reminiscent of Hiebert’s (2008) declaration: “It is not only the message we preach but the lives we live that will draw people to the gospel” (p. 319). How does Jesus translate into our context? Are we willing to go down in order to reach the unreached? I believe that the compassion arising from the contemplation of God’s glory should be fuel for our efforts. Our mission and offerings may lose genuineness unless inspired by the love and sacrifice exemplified by Christ (White, 1898, p. 37).

The Challenge of Frontier Mission

The Middle East is part of the bloc depicted in Figure 1, known as the 10/40 window. It appears like a belt encircling the earth—hence the name “resistant belt”—

positioned within latitudes 10o and 40o north of the equator where the majority of Muslim, Hindu, and Buddhist countries are located (Johnstone, 2009). The updated 10/40 window (Figure 1) incorporates additional countries that have a high density of unreached people groups in the vicinity of the original rectangular bloc. This implies that out of the 7.11 billion inhabitans on the planet, approximately 5.11 billion live there, 3.09 billion of whom are considered unreached (Joshua Project, 2020). Roughly 43 percent of the world population have yet to hear or respond to the gospel. The 10/40 window should be our main mission focus. It contains the poorest of the poor and is the most daunting stronghold of Satan. Paradoxically, this area receives far fewer workers and resources than needed.

Applying the current COVID-19 frame of reference, we can infer that the people in this resistant bloc have been for too long living in confinement. They are cut off from the gospel and isolated because of cultural, linguistic, religious, and political barriers external to the church but inherent to the people themselves. However, the most daunting resistance is not the external but the internal barriers within the church itself. These people have been isolated from the gospel because of our reticence and neglect. The peculiar challenge is that the vast majority of people living there can be reached only through incarnational cross-cultural approaches. We have to first deal with our own internal barriers in order to cross the external barriers rendering these people resistant to the gospel. It requires people eager to offer their whole being as frontier missionaries, and their finances to support missionaries and projects in these regions.

A Christo-Centric Theology of Offering

The gospel is all about Jesus Christ entering a world in confinement—isolated from God because of sin—reconciling humanity with God and putting an end to our confinement (2 Cor. 5:18-21). As such, He voluntarily offered the purest and most precious form of offering, Himself. Hence, Jesus embodies the quintessence of generosity through His sacrificial death (Eph. 5:2). We understand the true significance of giving through the incarnational and sacrificial acts of Jesus (John 3:16). Indeed, the word “offering” is an expression of voluntarily giving—during worship—entwined with the sacrifice of Jesus Christ (Heb. 10:10) in the context of the covenant of reconciliation (Arndt, Danker, & Bauer, 2000, p. 887). Therefore, a better understanding of the connection between mission and offering is contingent on an evaluation of theological posture, assumptions, and agendas through the incarnational lens.

The sacrificial or offering mindset is what leads people to dedicate their lives to Christ (White, 1979, p. 71). It is improbable that the majority of us can leave our homeland and offer ourselves as frontier missionaries. However, our offerings can take various shapes. For instance, we can all honor God and participate in mission through faithfulness in returning tithe and giving offerings. We can give to where we cannot go. The act of giving is important in itself. However, according to Jesus, it is the mindset and motivation behind our giving that is most valued by God. We can give out of our abundance, but the Lord is looking for men and women who give out of the fullness of their hearts (Mark 12:41-44; Matt. 26:6-13). God is longing for more people who, like the poor widow and the woman with the alabaster flask, are ready to pour out their hearts in their offerings to the Lord. Through His incarnation and death, Christ has offered His all to humanity. God’s mission to save humanity was the greatest offering of all time—His son on the cross.

The Link Between Mission and Offering

The life and death of Jesus is the first link between mission and offering. The name “Immanuel,” God with us, evokes the act of God crossing the sin barrier to unite Creator and creatures. The wall of separation has been brought down by the blood of Jesus (Eph. 2:13, 14; Rom. 5:10). God’s mission has been initiated and finds its fulfillment through the offering of Christ’s blood.

Following the paradigm above, Christ’s mission shifted sharply toward the inclusion of cross-cultural outreach as a result of the direct support that He and His disciples received from a group of women (Luke 8:3). As He preached the gospel across these regions, they did not hesitate to bring offerings to Christ’s mission. Immediately afterwards, Jesus crossed the barriers in the forms of the lake and the storm to a gentile zone—the country of the Gerasenes, where the people were culturally more Greek than Jewish as evidenced by the presence of pigs (Luke 8:26-39). The effort to cross barriers was intentional, as the following events show Christ reaching out to a woman who was outcast because of her blood issues, resurrecting Jairus’s daughter, and empowering and sending out the 12 apostles (Luke 8:40-56). There seems to be a direct correlation between the women’s giving and the outreach to the gentiles.

After Christ’s death, the disciples were reticent to engage in cross-cultural mission. The expansion of world mission was possible when the disciples put everything they had “in a common basket” (Acts 2:44-47). The sharing of resources was evidence that the Holy Spirit was moving the church toward mission (Acts 2:44; 4:32). The disciples also did not hesitate to sell their possessions (Acts 2:45; 4:34, 35) in order to collect financial assistance for struggling churches (1 Cor. 16:1-3). Such partnership enabled the redirection of resources to meet the priorities of God’s mission (2 Cor. 8; Gal. 6:6; Phil. 4:14).

The early church faced the same struggles we face today. They had a centripetal view of mission where everything revolved around Jerusalem and the Temple (Dumitrescu, 2008). As such, they were reluctant to engage in cross-cultural mission. Only when persecutions arose and the temple was destroyed, did they leave Jerusalem. In fact, the whole book of Acts is about the acts of the Holy Spirit dealing with barriers within the church and forcing it to embrace its mission. The apostles gave everything—including their lives—to follow the paradigm of Jesus Christ.

Urgency of Offering for Mission

Frontier mission remains the greatest challenge in the fulfillment of the great commission. It requires the mindset of Christ to accomplish this. It is also remarkable that the very last sign prior to the end has to do with the proclamation of the gospel to all ethnic groups in the world (Matt. 24:14). This highlights the fact that it is also the most arduous missional task. This is so not because of the external barriers of the 10/40 window, but because of our own internal barriers. Probably this is why the laborers and resources are lacking (Luke 10:2). If we are to participate fully in fulfilling this last sign, a willingness to sacrifice for others is required. The urgency to bring Christ to the unreached peoples of the earth requires our physical presence as well as our total financial commitment to frontier mission.

The needs we face in mission today are the same as those faced by the early church. Such needs can be met only through the sacrificial offerings of all believers inspired by relationship with Jesus, leading them to a new understanding of how to use belongings and resources. We also need new priorities. While we are busy building cathedrals in our own yards, others are longing for a hut in which to worship God. Mission suffers the most from an inward mentality. If we cannot go, we can at least faithfully give to send missionaries to the 10/40 window.

In financially supporting God’s mission, giving to our local church is just the beginning. We have to urgently consider supporting frontline evangelism. When we act in isolation, we achieve little. When we come together, we can do great things. Now is the time to prioritize frontier mission. It is worth offering all for that purpose. Our mission to the unreached will receive a tremendous boost if we view offering as an act of worship inspired by the vision of God’s glory and compassion at the cross. 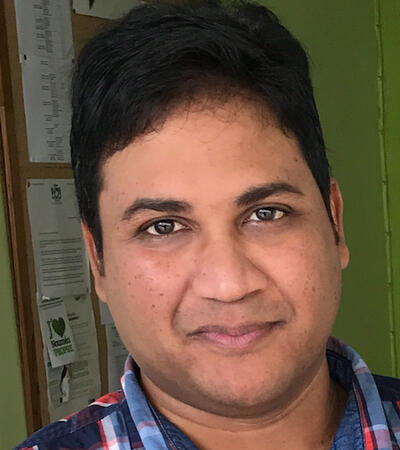 Hatsarmaveth Venkaya has a PhD in Intercultural Studies and World Mission from the Adventist International Institute of Advanced Studies (AIIAS). He is currently working as a pastor and Church Development director for New Caledonia Seventh-day Adventist Mission, in the South Pacific Division.